Some Scenes of the Devastation 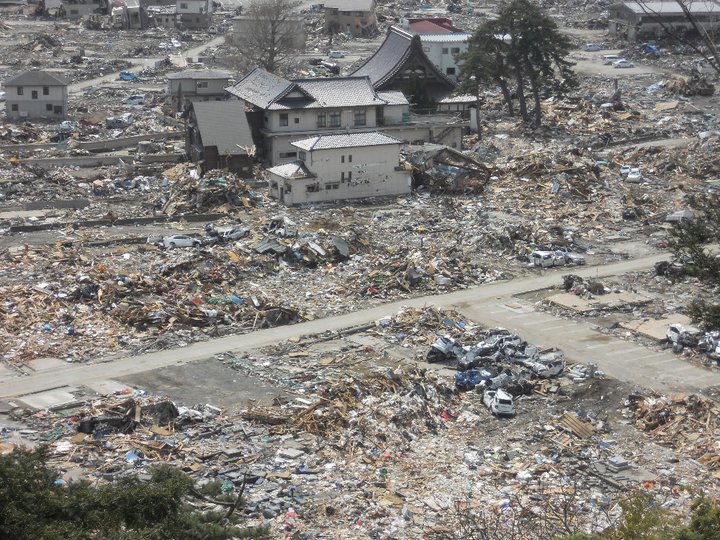 I am in Ishinomaki with Megumi and her friend Hiroyuki. They have set up a volunteer camp in the grounds of a university which is also a refuge for people who have lost homes in the town. There are 150 people staying in the refuge, one of 2200 across northern Japan. We brought some chocolate from the UK. I know it is not a big thing to do but actually they were really pleased, as everyone has just had basic food like rice and bread so far. Morale is a big issue and I hope this helps in some small way. On Monday we had meetings with Save the Children and Ashinagaikueikai to find out what they know about the affected children and especially those who have lost parents. They made it very clear that it is really hard just to get the basic figures together, and Ashinaga are doing the most to find out just have many children have lost parents. They have a plan to build a rainbow house in northern Japan to help those children in the same way they did after the Kobe earthquake. This is one project we would like to support. Ashinaga were very positive about a volunteer homestay programme in Oxford for affected children, later this year. They have to be very cautious about media at this stage so it is too early for us to follow their work in the affected areas. Yesterday we met with the main JET coordinator in Sendai and he explained the kind of problems JET teachers have faced but he knows that the situation in Sendai itself is not that bad compared to other areas. We then met with a British guy, based in Shiogama who has been here 20+ years and has a Japanese wife and family. He is working with others to try to get an NPO off the ground to help in various ways. We went to the coast with him to see the destruction a few km away. It was the first time he had been there and clearly very emotional for him. There is clearly a need to get more volunteers on the ground and we discussed the possibility of a local volunteer homestay programme to allow volunteers to come in from other areas / overseas with somewhere to stay. Today we have a few meetings including a nursery school in Ishinomaki. The impression so far is that it is every bit as bad as seen on TV. I looked at the BBC news website yesterday to see more than 80% of their headlines are linked to Fukushima – where no one has died and probably no one will. The 30,000 dead and missing to the north are already almost forgotten outside Japan. As an outsider it is easy enough to think they may just go and rebuild the towns in a year or two… in reality the problems are so severe they do not even know where to begin. The farming land is all saline now. Previously rice fields, they do not know how long it will be useless but it could be years. There may well be more dead bodies still buried under silt, with 14,000 still missing. Nearly 6 weeks on they have bared cleared the main roads and there are still cars and boats stacked on top of buildings. Some estimates are 10-20 years to get back to a normal functioning society. 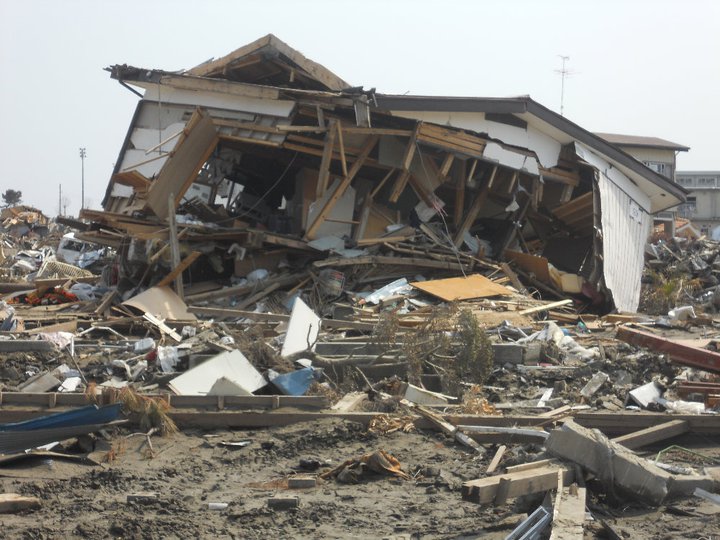 We visited three refuge camps and a nursery school today. There is a sense of absolute exhaustion, not just for the refugees but the staff too. Many staff are local government staff who come from all over Japan. Most of them sleep at the refuge centre and have 6 hours to sleep, working the other 18 hours of the day. We met one person who had little help during the first 2 weeks and had barely slept. They are doing an incredible job but there is no end in sight and no clear plans of what will happen next. One refuge was in a highschool sports hall. Today will be the (delayed) school opening ceremony for the new year. The school year begins in April in Japan so they will also have new students entering the school. The 200 refugees had come to this school 2 days ago to this “upgraded” refuge where they have made cardboard cubicles about 3m x 3m which at least gives some privacy. But the implication is that they will be here for the long term – certainly months and maybe years? The school will presumably run as normally as possible alongside. In the nursery school we heard how some children had proudly told everyone their house was washed away. 3 yr olds have a different perspective! 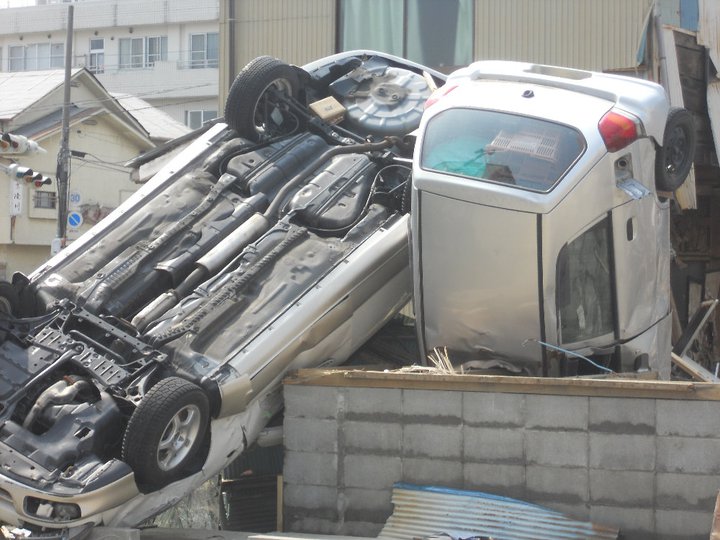 We had our first view if Ishinomaki from higher up and there are no words to describe it. We have all seen the TV pictures but seeing it makes it real. It appears to me that there has been almost no progress “clearing up” during this six weeks but locals tell me it was so much worse. The upsidown houses, boats inside buildings and crushed burnt metal wreckages of cars are all still there. In the evening we saw pictures of volunteers who had been further up to coast to areas where there really was nothing recognisable left. 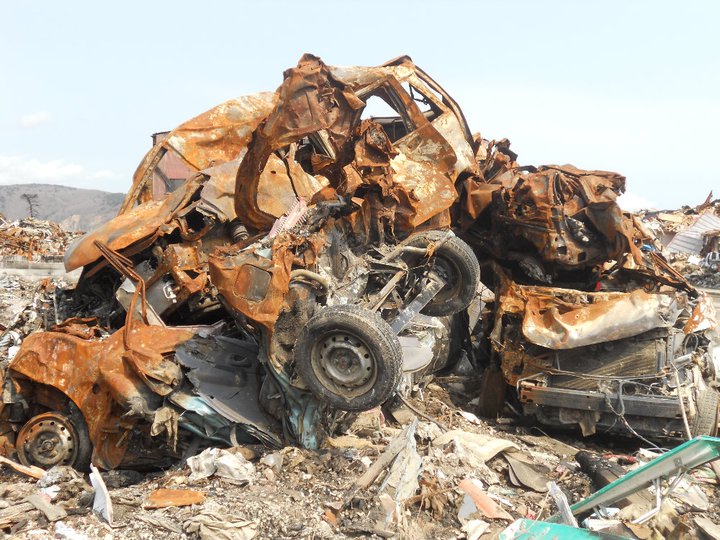 Amongst all this devastation there are pockets of hope, and we met someone in the afternoon who is exactly that ? he may be the most amazing person I have met in my life. My next report will be about him.

On Thursday we met Matsumura san, the owner of Matsumura Sports. We had been introduced by Julian from Shiogama and were met by his wife with a beaming smile. We heard the ground floor of their shop was probably ruined being in the heart of Ishiomaki. Indeed it was close to a building that is yet to have a boat removed. We heard from an employee how Matsumura san had been rushing around planning to set up a charity himself and then he told us Matsumura san had lost their house, washed away with so many others. They themselves were living in a refuge. Yes, the very same people who were setting up a charity had lost as much as anyone else and were smiling as if it were their own wedding day!!! When he came back he explained how the refugee centre was not being well lead so he started to lead the way forward in the midst of the confusion. Now his plan to set up sports camps for refugee children and invite famous sportspeople to the camps. As we talked his phone kept ringing and messages came in. “That call was a professional basketball player”, he said. It sounds like his plans are well on their way, but they do need help and he welcomed the idea of volunteers from overseas. I asked him if the media had shown any interest in his new charity given that he had also lost his house. “I have no time for media”, he said but agreed it might be useful for his cause soon. I forgot to mention, Matsumura san is 70 years old – he is the bald one in the photo. In the video on the right he and his wife are given some provisions from England. 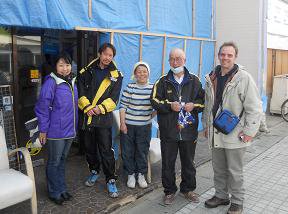 I am ashamed to say Friday was our only day as a volunteer. We joined an organised programme for volunteers to sign up at 8.30am, be assigned to a team and then whoever has cars takes you to the day’s location. I heard before that most of the volunteer work is simply removing mud from buildings it soon became clear that was still the case and could be for months to come. The first house we visited had all the floorboards removed which highlighted a particular problem ? Japanese houses tend to be built about 50-80cm off the ground and air flows freely underneath. Many houses now have this space filled with mud. Actually it is silt mixed with rubbish, household goods and, in Ishinomaki, paper pulp from the local factory. There were about 15 in our team from all over Japan, amongst them a young monk from Yokohama, two retired men from Fukuoka who had driven 1500km and a French landscape gardener who had become known for his super positive attitude. Our leader was 25 yr old Yuki, who went from Okayama to visit friends in Nagoya only to soon find herself travelling another 15 hours to Ishinomaki with other volunteers. She has been here a week and plans to stay another but who knows. I asked what her parents thought and her coming and she said her dad had volunteered to help after the Kobe earthquake – they can be very proud of Yuki. Most volunteers were managing to come for a week but I was told there would be many day-trippers at the weekend.


Some of the many volunteers who have travelled from all over Japan (and further afield!) to help.
In the first video, the 3rd man interviewed says he has driven from Fukuoka – a 2 day drive of nearly 1000 miles! In the second video, Matthieu, a gardener from France says that he just felt he had to come and help.

After a couple of hours we had clear the mud from the space under the floors and the garden next door. The couple who lived there were extremely grateful for the help and made sure we had drink and food. We moved on to another house and it was clear the garden here would probably take the rest of the day. 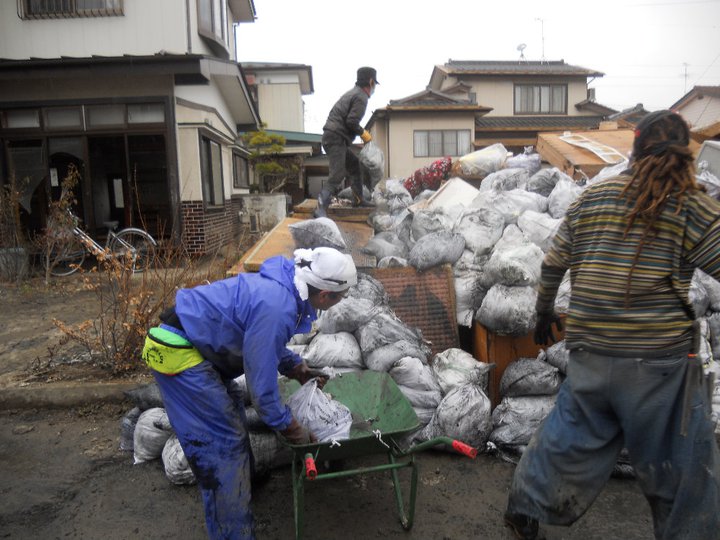 In the short breaks I would run off to take a few pictures. Alongside each side of every road were piles of household items and many white sacks. It was as if the houses had been picked up and all the contents shaken onto the piles. I had thought the sacks were sandbags in case of further flooding but I now knew they were full of mud. Wherever there was space there were much bigger piles of “rubbish” but I think these were actually the untouched areas of debris as many had cars on top, yet to be moved. I knew that it had taken 6 weeks just to get this far and all the roads had also been like this until the Japanese military cleared them. In between the houses that could be salvaged, others had walls torn away and roofs sagging. It struck me that many of the people here were living upstairs or with relatives and don’t even appear in the figures of dead, missing and refugees.
After a few more hours of intensive work we had just about cleared the garden and garage of the second house. Stuffed toys, schoolbooks, an intact bottle of whisky all came from the mud. The volunteers all fear the prospect of coming across a dead body which is entirely possible given the depth of the mud. This house will still need a huge amount of work clearing inside, anything below the waterline, just inches below the ceiling. At that location I think we were about 1km from the coast.

That evening Yuki told me we had 2,000 sacks delivered in the morning and we used at least 1,000. Each sack was 15-20kg meaning that we probably shifted over 15 tons of mud from two houses alone. Two houses in one town along 700km of affected coastline. You can understand the estimates of 10-20 years to be “back to normal”. 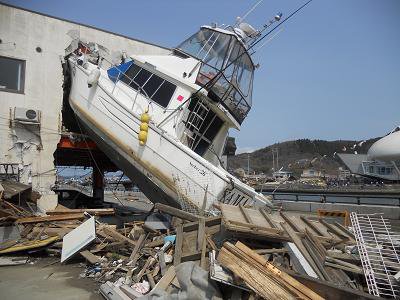 Please see our Facebook Page for more photos and information and our Youtube page for more videos.